We recently enjoyed a visit from my sister for two weeks.  She joined in teaching homeschool to the younger kids including pretending to be archaeologists discovering mummies in Egypt and drawing pictures and letters with chalk.  The older kids enjoyed playing games with her or sword-fighting in the front yard or looking at mushrooms under a microscope.  Of course, the kids also had to endure some time without their beloved "Auntie Erin" as she and I had some sister-time at a ladies retreat here at camp.

At the end of her time, she treated us to a safari trip to Queen Elizabeth National Park in the western part of Uganda.  We had never been to that area and really enjoyed the beautiful view of the Rwenzori Mountains as we were at the park.  We were so thankful to have her here with us!!

Posted by africanjacksons at 2:00 PM No comments:

Testimony time at our church each week is usually my favorite part of the service.  As various people stand up and declare praise to God for the big and small things He has done in their lives, the focus of my mind and heart begin to shift toward this great God that we come to worship.  There is a reason that "Praise the Lord" is a common thread in the Psalms, a book of worship. 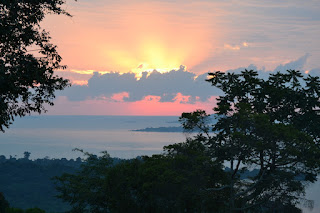 People here begin most of their testimonies with "Praise the Lord!" And the congregation typically responds with a resounding, "Amen!" Then they begin to tell of the things God has done for them.  I am usually fairly shy in public settings, so I don't stand up and share a testimony very often (even though I probably should!).  But if I could shout out some testimonies of praise to God for things in our lives over the last month, these would be some of them... 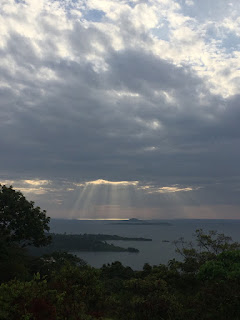 So for all of these things and many more, we say an emphatic, "Praise the Lord!!!" And we hope that you will respond wherever you are with your own "Amen!" to the work God has done here!
Posted by africanjacksons at 3:01 PM 1 comment: 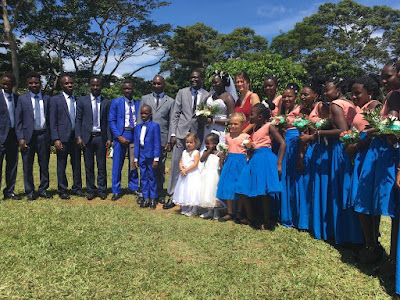 When we first came to Uganda eight years ago, we spent a lot of time learning about this new culture we were living in.  At the time, I think I had the idea that we would have to learn a lot of new things for the first few years here and then after that we would know all the ins and outs of the culture.  But I had a realization moment about a year ago that this expectation was so wrong!  I was still learning new things, yet we had been here more than just a few years!  (Or maybe it is that I am just a slow learner! :D) 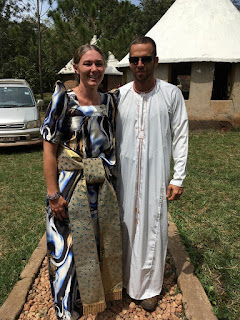 So, there have been numerous times in the last year that I have learned new things about Ugandan culture.  Last week was one of those times for me.  Two of our good friends from Musana were getting married last weekend.  Traditionally, there is a ceremony called an introduction that happens before the church wedding.  In the past, the introduction was the official wedding ceremony where the groom and his family were introduced to the bride's family, where the dowry was paid, and where the bride's family officially gave her to the groom in marriage.  Today, couples in the church often have a church wedding along with this introduction ceremony.  So, our good friends invited us to be part of their "family" at the introduction.

Everything about the ceremony was a new experience...wearing the traditional cultural dress, watching the traditional dances, the hours of greeting and gift-giving.  I was so thankful to be able to sit next to another Ugandan friend so that she could interpret for me and explain the meaning behind the things going on and even how the traditions have changed over the years or from family to family.  While it was very different from anything we do in the States, we appreciated the emphasis on hospitality, the blessings and prayers over the couple, and the formal giving over of the bride to the groom. 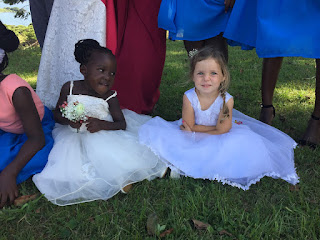 Every time I learn new things about the culture here, I am challenged to look at my own cultural traditions, to understand the meaning behind them and see how they have changed and to see the good and bad elements within them.  Living in a different culture gives me an opportunity to take a step back and think about how God sees the things we do.  And it reminds me how He has created diversity and how He loves to bring diverse people together in unity within His family!

So I am sure that there are still many, many things that I have yet to learn about Ugandan culture, but I am thankful that God lets me keep learning about my brothers and sisters in Christ.  He keeps challenging me to be humble and look at things from a different perspective.  And we pray for His blessings on this new couple in their new life together!!

Posted by africanjacksons at 4:37 PM No comments: 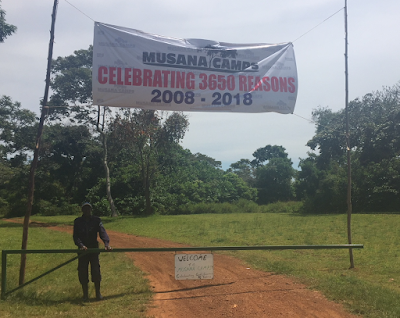 Last weekend we celebrated the 10th anniversary of Musana Camps.  The first camp in 2008 was a family group from Kasana Children's Center.  They camped in small tents since there were only a few buildings on the property at the time and had to carry all of their water for cooking and bathing.  Things have changed quite a bit around here over the last ten years!

During the course of the weekend, we heard many testimonies of how God has used this place to change people's lives.  Many previous campers and staff attended the celebrations, and it was a joy to reconnect with them.  We planted trees in the community, held a community football tournament, hosted several celebratory meals, and even had fireworks one night!  For our church service on Sunday, we had over 500 people attend, with several of them coming to salvation during the message!

We praise God for all the ways that He has used this place to build His kingdom and inspire growth in the lives of His disciples.  You can watch a video of highlights of the weekend here and a video of Musana's first ten years here.
Posted by africanjacksons at 4:13 PM No comments: 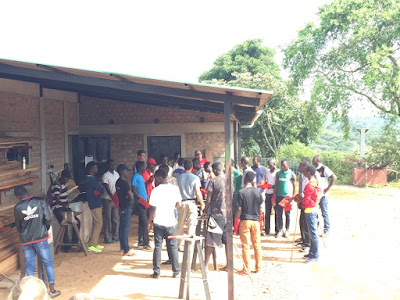 Musana Camps was a busy place last week!  We had a two-day youth camp from a school in Kampala at the beginning of the week, three families staying in the guest house later in the week, and a week-long ROPES (Rites Of Passages ExperienceS) camp for Investment Year (IY) students from New Hope Uganda, which was going on as the other campers came and went.  As the staff met together before the week began, we talked about being prepared for “teachable moments,” times when the Holy Spirit was doing a work in a person’s heart and we as staff could come alongside and be part of that work.  The week was indeed a bit crazy for our staff trying to juggle the different needs of the different groups, but God also answered our prayers for teachable moments.  Here is one that we personally got to be a witness to… 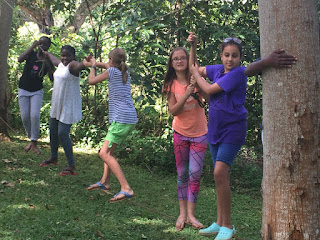 Tuesday afternoon, Nathan and I both helped to lead the youth campers through some of the elements at our low-ropes course.  Being only 10-13 years old, some of the elements were quite a challenge to them.  In their first challenge, the girls all fell off the course several times and had to start over.  As they finally began to conquer the difficult sections of the course, they one by one made it to the finishing tree and tried to encourage their teammates that came behind them. The last girl to complete the course fell off the wire several more times before finishing, partly due to carelessness on her part and partly due to carelessness on the part of her teammates trying to "help" her finish.

As we discussed the challenges and lessons we could learn from our activity, several people answered with normal things like “teamwork” and “helping one another” and such.  After a few minutes, I heard the one that had finished last mumble something off to the side, so I asked her to repeat her answer so we could all hear.  She was a little embarrassed and didn’t want to talk at first, so I pressed her a little to be honest and share with the group.  Finally, she said, “I am a failure.”

Wow.  I was a bit shocked by her honesty, and everyone else was quiet for several seconds.  Inside I wanted to shout, “No!  That’s a lie!”  She began to cry and a friend of hers went over to comfort her.

I asked the group to tell me the difference between failing and being a failure.  It was an interesting discussion that followed.  Many of them wanted to say that we are not a failure as long as we keep trying when we fail or as long as we have friends around us to support us.  In other words, just try harder or just make sure people like you and stand by you.  But I pushed them further than that…what if you find you can’t try again? (you don’t always get to re-take a test!)  Or what if you find yourself all alone?  Then, does that make you a failure?

Our hearts are so often deceived by the father of lies.  We believe that making mistakes in what we DO says something about the value of who we ARE.  Yes, we are sinners, separated from God; and we need God’s gift of salvation through Jesus to bring us back into a right relationship with Him.  So, without Christ, we will always come to a point of failure.

But we are also “fearfully and wonderfully made” (Psalm 139:14).  “Wonderful are His works” - He didn’t make mistakes as He was making you!  And even when we were separated from God by our sin nature, we were loved by Him before we were saved (Romans 5:8).  Our VALUE as human beings rests not in ourselves, but in the love and craftsmanship of the Almighty God.

So, I took the opportunity to speak truth to this young girl in front of her peers - “You are loved.  You are beautiful.  The King of kings desires for you to be His child.” - and to pray over her, asking God to speak His truth into her heart.  Mistakes do not change these truths.  Mistakes should only draw us closer to the God who created us and loves us and desires to speak His truth in our hearts.  I

That was one teachable moment that I was able to be part of last week.  And I pray that God used those moments in the challenge course to transform the lives of those young girls with His truth.

Posted by africanjacksons at 1:55 PM No comments: